Film Synopsis: (allmovie.com)
With Poltergeist, directed by Tobe Hopper, Steven Spielberg had his first great success as a producer. Released around the same time as Spielberg’s E.T., the film presents the dark side of Spielberg’s California suburban track homes. The film centers on the Freeling family, a typical middle class family living in the peaceful Cuesta Verde Estates. The father, Steve (Craig T. Nelson), has fallen asleep in front of the television, and the dog saunters around the house revealing the other family members — Steve’s wife Diane (JoBeth Williams), sixteen-year-old daughter Dana (Dominique Dunne), eight-year-old son Robbie (Oliver Robins), and five-year-old Carol Ann (Heather O’Rourke). Soon strange things begin to happen around the house; the pet canary dies, mysterious storms occur, and Carol Ann is summoned to the TV set, where a strange shaft of green light hits her and causes the room to shake (“They’re he-e-ere!”). As curious events continue, Carol Ann is repeatedly drawn to the television, where she begins to talk to “the TV people.” Soon Carol Ann is sucked into a closet, disappearing from this reality plane. Unable to find his daughter, Steve consults Dr. Lesh (Beatrice Straight), a para-psychologist from a nearby college. Lesh finds that paranormal phenomena is so strong in the Freelong household she is unable to deal with it and sends for clairvoyant and professional exorcist Tangina (Zelda Rubinstein) to examine the house in hopes of finding Carol Ann. Tangina makes a horrifying discovery: Carol Ann is alive and in the house, but is being held on another spectral plane. 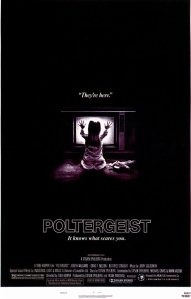 Short Bio: (wikipedia.org)
Margaret JoBeth Williams (born December 6, 1948) is an American film, television and stage actress and director. She rose to prominence appearing in such films as Stir Crazy (1980), Poltergeist (1982), The Big Chill (1983), The Day After (1983), Teachers (1984) and Poltergeist II: The Other Side (1986). She has also performed in numerous other roles. She has been nominated for Oscar, Golden Globe and Emmy Awards. Williams is the current president of the Screen Actors Guild Foundation.

Williams is the daughter of Frances Faye (née Adams), a dietitian, and Fredric Roger Williams, an opera singer and manager of a wire and cable company. Williams grew up in the South Park neighborhood of Houston, and she attended Jones High School.

She attended Brown University in Providence, Rhode Island, intending to become a child psychologist. Instead, she turned to theater, training with Jim Barnhill and John Emigh as well as at the Trinity Repertory Company, taking voice lessons to neutralize her Texan accent. Then she moved to New York City and began to appear in television series in the mid 1970s.