Film Synopsis: (allmovie.com)
The feature-film debut of director Zack Snyder, Dawn of the Dead is a modern retelling of George Romero’s 1978 horror classic, which was actually the second film in a trilogy that began with Night of the Living Dead and concluded with Day of the Dead. Sarah Polley and Ving Rhames star as two of the last remaining people on an earth that has been ravaged by flesh-eating zombies. After escaping to a shopping mall with a handful of other survivors, they decide that they only way to truly elude the approaching throng of undead is to somehow make their way to an island that is supposedly zombie-free. Jake Weber and Mekhi Phifer also star. 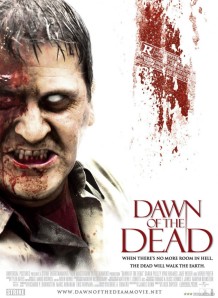 Short Bio: (wikipedia.org)
Sarah E. Polley (born January 8, 1979) is a Canadian actress and film director. Polley first attained notice in her role as Sara Stanley in the Canadian television series Road to Avonlea. She has also starred in such films as Exotica, The Sweet Hereafter, Guinevere, Go, The Weight of Water, My Life Without Me, The Adventures of Baron Munchausen, Dawn of the Dead, Splice, and Mr. Nobody.
Polley made her feature film directorial debut with Away from Her, for which she won a Genie Award for Best Achievement in Direction and was nominated for an Academy Award for Best Adapted Screenplay.